Northern peatlands: Climate and its effects on microbial activity

Circulation Models of global climate change predict that regional warming will be most intense, and precipitation during summer and winter will also be largest, over northern high latitudes. This is supported by measured temperature increasing throughout the northern high latitudes as shown in the video to the left depicting the deviation from seasonal mean temperatures (June-July-August) from 1985 to 2011 from a base period of 1951 to 1980. 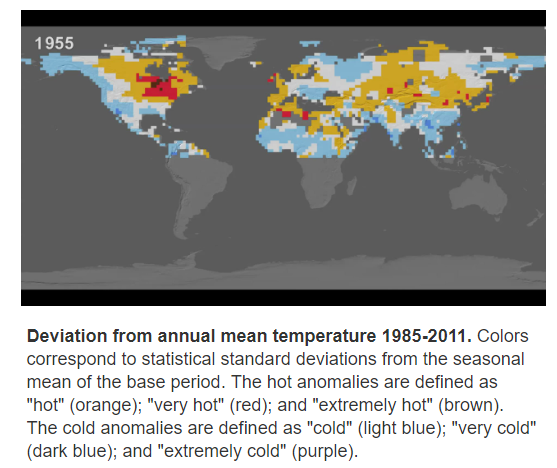 Critically, atmospheric warming in regions holding ecosystems with high density of organic carbon (OC), such as peatlands, can have the most significant impact in atmospheric change and further add to climate warming by the increased release of greenhouse gases (GHG) such as CO2 and methane (CH4). Peatlands are most abundant in cold northern latitudes and are also the most important repositories of OC, storing nearly 30% of all terrestrial C. The distribution of peatlands from temperate to arctic latitudes (and hence climate), adds complexity when attempting to predict effects of warming on GHG release. The different climate across peatland-containing regions can modulate the effects of atmospheric warming and feedbacks from GHG flux.

Peatlands are among the main natural sources of CH4 release, and CH4 is released as a direct consequence of OC decomposition by microbial activity. Understanding the microbial role in controlling the substrates needed for CH4 flux activity requires urgent attention if we are to accurately predict rates of CH4 emissions or feedbacks associated with atmospheric warming.

This research line at the Cadillo Lab seeks to expand on previous findings about methanogenic Archaea and their activity in peatland types known as “bogs and fens”. We have analyzed patterns of methanogenic communities from peatlands across a broad geographical range in northern latitudes and found that climatic regime have an effect structuring the community make up. Methanogens are dependent on Bacteria to provide their metabolic substrates; hence a relationship of OC-degrading bacteria to climate is hypothesized.We are testing a range of climate driven hypothesis on methanogenic Archaea and Bacteria. Whether climate drives the phylogentic or functional make up of microbes is an important research goal in our group. We also collaborate on modeling efforts to incorporate microbial diversity and functioning in full ecosystem modeling. We collaborate with multiple groups including faculty and researchers at Carleton University, Trent University, Cornell University, University of Oregon, and Marcell Experimental Forest - Northern Research Station, Lawrence Berkeley National Laboratory, and Purdue University. We are always looking to expand our collaborative work with scientist from peat containing regions.